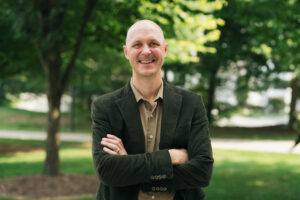 Biographical Sketch:
Peter Mucha is the Jack Byrne Distinguished Professor in Mathematics at Dartmouth College. Born in Texas and raised in Minnesota, Mucha attended college at Cornell University where he majored in Engineering Physics. After a Churchill Scholarship studying in the Cavendish Laboratory at Cambridge with an M.Phil. in Physics, he returned to the States to study Applied and Computational Mathematics at Princeton, earning M.A. and Ph.D. degrees. Following a postdoctoral instructorship in applied mathematics at MIT and assistant professorship in Mathematics at Georgia Tech, he moved to UNC-Chapel Hill for 16 years, where he served as chair of the Department of Mathematics, the founding chair of the Department of Applied Physical Sciences, and the Director of the Chairs Leadership Program at the Institute for the Arts & Humanities. His awards include a DOE Early Career PI award, an NSF CAREER award, and recognition as an HHMI Gilliam Advisor. Mucha arrived at Dartmouth in 2021 as part of The Jack Byrne Academic Cluster in Mathematics and Decision Science.

Pronunciation:
If you really want to get it right, my last name is pronounced the same way as Alphonse Mucha’s (sound file). But I don’t even get it right myself: the Americanized pronunciation I use sounds like the vowel and ‘k’ in “book” (/’mʊk-a/).

No archives to show.